For the athlete, or weekend warrior, seeking to increase fat-burning during a workout or vigorous exercise, THERMAL LEAN steps up to the plate and provides that and more.

For the athlete, or weekend warrior, seeking to increase thermogenesis during a workout or vigorous exercise, and to have the juice to take that workout the extra distance, THERMAL LEAN steps up to the plate and provides all that, and more.

WHAT ARE THE INGREDIENTS IN THERMAL LEAN?

The amino acid L-Tyrosine is a building block of neurotransmitters, which work to regulate the mood, helping us to feel good. These positive feelings encourage us to want to exercise, and help to prevent food cravings, thus allowing us to make better dietary choices. As well, L-Tyrosine is essential for proper thyroid function, which in turn keeps the metabolism at an ideal level aiding in burning stored body fat.

The main function of L-Carnitine, a non-essential amino acid, is to help transport fatty acids into the mitochondria, where the fat is burned as fuel for the body. This produces the energy molecule ATP, a major source of energy for the muscles.  Studies have shown L-Carnitine can help to improve recovery, and reduce muscle damage and oxidative stress, caused by exercise. And, by using up fat as an energy source, L-Carnitine can prevent fatty build up in the heart, liver and skeletal muscles. When taking thermogenic (fat burning) substances, like those in this formula, one needs L-Carnitine to ensure that the body fat that is released into the bloodstream gets burned up, and turned into fuel for the body.

Green Coffee Bean Extract serves as both a natural, safe weight-loss agent, and is also a powerful antioxidant and insulin stabilizer. Green Coffee Bean Extract creates fat loss through mechanisms that are not based on over stimulating the nervous system, but rather through the insulin stabilizing action of the chlorogenic acid. When insulin is stable we cease to crave sugar and refined carbs, and the body is less inclined to store carbohydrates as fat deposits.

The green (raw) coffee bean contains high amounts of chlorogenic acid, but as soon as you roast the coffee beans, you lose most of the chlorogenic acid and other beneficial antioxidant compounds. Therefore, we do not get the same benefits from drinking coffee as we get from using the green coffee bean extract.

Caffeine is the energizing compound found naturally occurring in coffee and tea, but isolated Caffeine Anhydrous is the form of caffeine shown to be much more effective for improving mental and athletic functions. As a central nervous system stimulant, caffeine has many beneficial effects, including increased alertness, decreased fatigue, and improved athletic performance during both long-term endurance trials, and short-burst, intense events.

Evodiamine is an alkaloid extract that comes from a plant called Evodiae Fructus, which the Chinese have used for centuries to aid with weight loss. It is a stimulant, which increases resting core temperature, thus raising body heat and allowing for the burning of more calories. Evodiamine also releases catecholamines (excitory neurotransmitters), such as dopamine, adrenaline and noradrenaline, which raise the mood, and provide both mental and physical energy. Other benefits attributed to Evodiamine include: curbing the appetite; diuretic properties; and increased mental focus.

Olive leaf is widely used in herbal medicine due to its anti-bacterial, anti-fungal, antioxidant, and anti-viral properties. In 2010 researchers at the University of Queensland conducted a study to investigate whether the benefits of Olive Leaf Extract extended to weight loss. Laboratory rats were put on a fattening diet and half of them were given olive leaf extract for 4 months, and half of them did not receive the extract.

At the end of the study, the rats that had been fattened up, but did not receive the supplement were suffering from metabolic syndromes, including fatty build-up on the heart and liver, and in the arteries, while the fattened rats that did receive the Olive Leaf Extract showed improved cardiovascular health and metabolic benefits. The Olive Leaf Extract lowered the concentration of fat around the stomach area, and reduced harmful fat deposits within the body.

L-Theanine is an amino acid derived from green tea leaves that promotes a calm and relaxed mood. L-Theanine quickly raises serotonin levels in the body reducing agitation and calming the nervous system.  When combined with caffeine, L-Theanine works to promote an alert focused mental state, without the jitters. Even though this formula has only about as much caffeine per serving as a cup of coffee, we have included L-Theanine to balance out the caffeine’s effects. This way the formula can be energizing without being agitating.

African Mango contains Irvingia gabonensis a compound that has been patented as a weight loss aid. A 10 week, double-blind, placebo-controlled clinical trial with 102 participants resulted in weight loss & reduction of the waistline. African Mango works to increase thermogenesis (fat burning), and to reduce the formation of fat stores in the body, and as well curbs the appetite by helping you to feel full longer.

The spice nutmeg contains two compounds, myristicin and macelignan, which have been proven to reduce the degradation of cognitive function that afflicts people with dementia or Alzheimer’s disease. For younger people those compounds boost brain activity and keep your brain functioning at a normal, healthy level. It improves concentration and focus, in part by improving circulation throughout the body including the brain, and it reduces mental stress.

Theobromine is a naturally occurring substance found in many species of plants, but is especially high in chocolate. Theobromine is a relative to caffeine, though it has a slower and longer lasting stimulant effect than caffeine. Aside from providing an increase in physical energy, Theobromine can also support mental well being, improving mood and cognition.

Bitter Orange (30% synephrine) is high in synephrine hydrochloride, an effective alternative to stimulants, which can leave people feeling jittery, or wired. Synephrine has the ability to increase both energy and metabolic rate, without increasing heart rate or blood pressure, which has led to its popularity as a weight-loss aid, and energy booster.

AstraGin® is a patented extract of two herbs, Astragalus and Notoginseng, clinically proven to dramatically improve nutrient absorption in the body. The increased bioavailability of all the nutrients present in this formula makes it even more efficient at producing the desired effects of fat burning, while improving mood, cognition and energy levels. 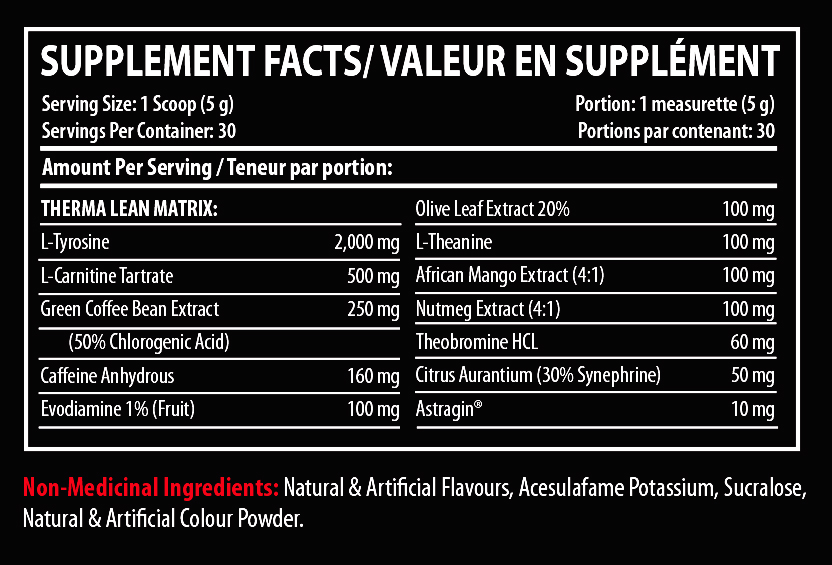